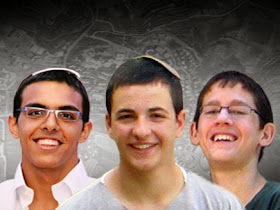 Just announced by Israel Channel Two that a joint IDF and Shin Bet statement Israel has announced they have recently arrested Hussam Kawasma, the officer in charge of the group which abducted and murdered the three boys.

Hossam is a squad commander for Hamas in Gaza. He was arrested and admitted to the being the commander of the kidnapping operation which was funded by Hamas. Israeli authorities are still pursuing the actual killers Marwan Kawasma (a relative of the man just arrested) and Omar Marwan Abu Aisha.

Interesting is that critics of Israel admonished the Jewish State for blaming Hamas for the kidnapping when (according to the critics) there was no proof the terrorist group was behind the abduction. Now that the commander of the operation has admitted he works for Hamas perhaps those critics will move on and invent other ways to trash the Jewish State.