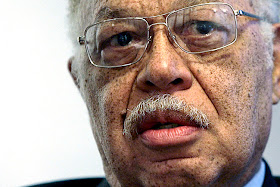 Here comes the race card.  In a move displaying the desperation the defense must feel, Kermit Gosnell's attorney blamed his prosecution on racism in his closing arguments today repeating the charge he made during opening arguments.

Defense lawyer Jack McMahon delivered his closing argument on behalf of abortionist Kermit Gosnell on Monday, accusing  prosecutors of “manipulating” the case to engage in an essentially “racist” prosecution of the man charged with four counts of first-degree murder, killing babies born alive during abortions by snipping their spinal cords with surgical scissors.

“Never have I seen the presumption of innocence so trampled on, stomped on,” said McMahon in court today, adding that the Philadelphia district attorney’s office “tried to manipulate everybody” and was pursuing an “elitist, racist prosecution.”

“Dr. Gosnell is not the only one doing abortions in Philadelphia,” McMahon said, “but he was an African American singled out for prosecution.”

“We know why he was targeted,” he said. “If you can’t see that reality, you’re living in some sort of la-la land.”

Racist? Gosnell's employees testified that the doctor "snipped the spines" of over a hundred babies born alive.  And since a big part of his practice was African-Americans, Gosnell killed babies of all races. Although Kermit Gosnell did treat his Black clients different than his white ones.


It is also a story about a place where, according to the grand jury, women were sent to give birth into toilets; where a doctor casually spread gonorrhea and chlamydiae to unsuspecting women through the reuse of cheap, disposable instruments; an office where a 15-year-old administered anesthesia; an office where former workers admit to playing games when giving patients powerful narcotics; an office where white women were attended to by a doctor and black women were pawned off on clueless untrained staffers.

So who is the racist?

Gosnell's Attorney Jack McMahon used the race card in his opening statement also. He charged the trial is coming from prosecutors trying to "put Mayo Clinic standards into a West Philadelphia clinic." To which said Alveda King, director of African American Outreach for Priests for Life answered:


"Don't black women and babies deserve Mayo Clinic standards? You sir, are being elitist and racist to suggest that we do not. We reject the notion that the black and brown women Gosnell preyed upon deserved less. Your tactics are shameful, outrageous and an affront in the face of God," she said.


"Kermit Gosnell is the black community's Mengele because he especially preyed on children of his own race who were fully born—totally free to experience the life and liberty that we are all promised in America. Yet, at that moment of new life, the child—in warm hands, breathing air, seeing first light—may have also seen the face of his or her executioner. The only factor of 'race' is that Gosnell killed these children because he could. He thought no one would really care—after all, it's just one more black child dead in Philadelphia," Gardner said.

The use of the race card is often ridiculous, the charge is made and you wonder how someone got race out of it like when Chris Matthews said using the world Chicago had racist implications. Attorney McMahon's use of the term is not ridiculous..it is evil.  I can think of nothing more racist than a Doctor murdering African-American babies, while treating white patients better than the Black ones.

It is Dr. Kermit Gosnell who is the racist, and it is his Attorney Jack McMahon who is practicing racism by offering a weak charge of bias as the only defense for this serial murderer.
Unknown at Monday, April 29, 2013
Share