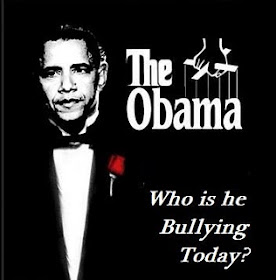 Omerta is the Italian word for "humility." It was also the code of silence in the Mafia the breaking of which was punished severely. Apparently the Obama Administration has a similar code of silence.  According to Fox news at least four career employees of the State Department and the CIA have been threatened not to talk by their superiors.


Victoria Toensing, a former Justice Department official and Republican counsel to the Senate Intelligence Committee, is now representing one of the State Department employees. She told Fox News her client and some of the others, who consider themselves whistle-blowers, have been threatened by unnamed Obama administration officials.

But Wait! Isn't this supposed to be the most transparent administration in history? Why would they threaten people to prevent them from talking to congress?


“It's frightening, and they're doing some very despicable threats to people,” she said. “Not ‘we're going to kill you,’ or not ‘we're going to prosecute you tomorrow,’ but they're taking career people and making them well aware that their careers will be over [if they cooperate with congressional investigators].”

If the Obama administration had nothing to hide they wouldn't be trying to prevent people from testifying.  Chairman Issa is poised to protect these whistle-blowers so the American people can finally learn the truth.

UPDATE: Doug Ross has a transcript of what these whistle-blowers intend  to say...click here to read it
Unknown at Monday, April 29, 2013
Share