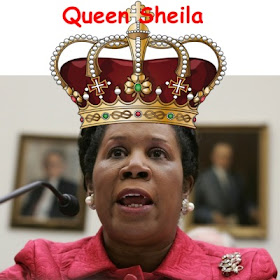 It's well known that Sheila Jackson Lee's brain lights are set to dim.  Jackson Lee who once stood on the floor of the house  discussing how North and South Vietnam are living peacefully side by side, even though there hasn't been a North and South Vietnam since Gerald Ford was President, or the time she insisted the Obama tax/penalty was not a penalty, “I would make the argument, one, that instead it is an incentive to do right, "

When the Daily Caller examined Jackson-Lee's management skills, they learned the extent of her nastiness.

Rep. Sheila Jackson Lee of Texas also hands out nicknames to the people who work for her. The Houston Democrat addressed one of her employees as “you stupid motherfucker.” And not just once, but “constantly,” recalls the staffer, “like, all the time.”

Adding to her resume of incompetence, two years ago we learned the IQ-challenged lawmaker is being sued by one of her former staffers for being particularly nasty about her disability.


.....a former top aide to the Texas Democrat, said the lawmaker's public support for the disabled was nowhere to be found in her own congressional office when it came to the aide's vision impairment. Mona Floyd, who served as the congresswoman's legislative director, has monocular vision. She said she was told by Mrs. Jackson Lee in a private conversation within weeks of the hearing, "I don't care anything about your disability."

Since the suit was filed Ms. Jackson Lee has been trying to get it thrown out:


A judge has refused to dismiss a federal lawsuit accusing Rep. Sheila Jackson Lee of discriminating against and mocking a disabled staffer — charges the Texas Democrat denies.

According to Lee's attorney, her abuse was protected speech under the Speech or Debate clause of the Constitution. In a lengthy ruling, the judge laughed disagreed.


“Decisions about whether to allow an employee to rest or to have additional time to complete an assignments are not legislative acts for which the representative enjoys constitutional immunity from suit,” U.S. District Judge Rudolph Contreras wrote in a Sept. 30 opinion.

Questions to Mrs. Jackson Lee’s office were not returned on Tuesday, but her chief of staff, Glenn Rushing, said soon after the lawsuit was filed that the congressional office “fully practices equal employment opportunities for all.”