Did Eric Holder Force Black Kids Into Lousy Schools So He Can Brag About Diversity Stats ? 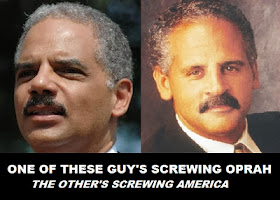 Is there anything this administration wont do to make itself look good.  According to over two dozen senators the answer to that question is no. This group of senators is charging that Attorney General Holderis pushing black students into schools that are failing just so he can brag about diversity statistics.


Republican Sen. Pat Toomey was one GOP member who made the accusation, speaking about the fallout from Hurricane Katrina in Louisiana when needy students in the state received scholarships for private schools. The students hailed from schools that were failing, more than 90 percent of them minorities, the Hill reported.

But the Justice Department asked that some of those students stay at their present schools — the failing ones — to ensure the ethnic population contains at least 30 percent blacks, the Hill reported.

Mr. Toomey was outraged, saying the number of students who was asked to trade a school transfer for a Justice Department diversity rate was 570.

“The fact that Attorney General Eric Holder would block any child from obtaining a good education is bad enough,” he said. “The fact that he is doing so based solely on the children’s race is inexcusable.”

Toomey and his colleagues sent a letter to holder saying in part:

Is it really possible for the Obama administration to be this cynical?  I pray that the senators are wrong,  but based on what I've seen over the past five years....anything is possible.